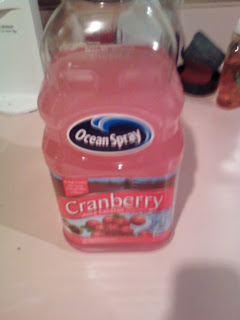 Recycling at it's best! After consuming all of the cranberry juice I decided to make some pink lemonade. But instead of dirtying a pitcher, I decided to re-use the plastic bottle. It's part of my attempt to be pro-active in trying to save our planet. I do recycle, and try to re-use as much as possible. But it sometimes is not an option as some areas that don't recycle.

Something that i learned recently is that aluminum cans can be recycled over and over, and never break down. Also when you recycle a can, after it goes through the process of recycling, that same can could end up back in your fridge 3 months later. Pretty cool!

Sorry the pic is kind of blurry, I guess I moved my hand too soon after hitting "capture."

I went thru a stage last Summer in which I made homemade lemonade everyday. Then I read an article about how bad it is for the enamel on your teeth. Why must everything I like be bad for me! Alcohol, bonbons, drugs, random sex, lemonade!
Just kidding about two (really one) of those things!

LOL.. I feel your pain. I know the lemonade is bad for my teeth, but it's so yummy! Oh well.

Marie, I do the same thing! I always refill my juice containers with other drinkables! Wow, that's pretty interesting, the can or cans you recycle can end up in your possession again! - Great idea!!!

p.s. I luv lemonade but it keeps my kidneys busy- it's sooo refreshing especially when I freeze it so it's slushy, yum, yummy!!!

I know exactly what you mean by freezing the lemonade! I do that in the summer for a refreshing treat. I also like to add fresh lemons to my lemonade I make from the country time drink mix.