Sean's surprise birthday was so much fun. I got to his mom's house around 645 pm, and that was great timing because they left the their place around 650 pm. Lucia was texting as Sean drove so she could let us know what was going on. He had no idea what was going on. When they got to the bridge and were 5 minutes away she sent another text, that's when all the lights went out, and everyone got into place.

It was so exciting because as he came through the door everyone shouted "Surprise!" he almost fell over from being so surprised! It was really funny. Sean spent 20 minutes walking around in a daze saying hi to everyone, and he didn't even realize who I was until I said, "thanks for paying for my birthday dinner." Ha ha, when I went out to dinner Sean wasn't able to make it, so he sent his credit card with Lucia, and paid for dinner. 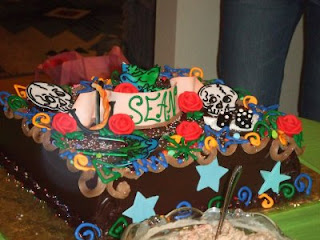 The cake! What an awesome cake Lucia got for him! 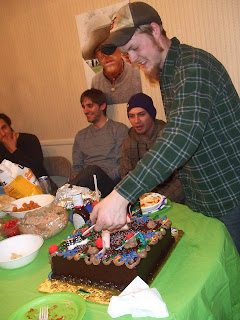 Here is Sean getting ready to cut the cake after everyone sang in unison Happy birthday!! 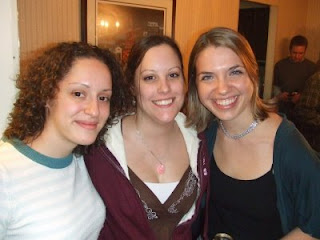 Robyn, myself and Cindy!

The party was so fun! I wish I could have gotten a pic with Lucia, but she was walking aorund saying hi to all his family and what not, so she was just a touch busy.
Created by ~Marie~

Marie, I luv the cake, it's too spectacular to eat! A surprise Birthday party, wow that sounds like fun!!! I still can't get over the cake that's a Wow itself!

That cake is awesome looking, hop it tasted as great as it looks. Sounds as if the party was a big hit!

Debra, it was so much fun!! I can't begin to tell you how fun it was.

Gerri, The cake was awesome looking and really yummy! I hope to one day have an awesome cake too.

CC, the cake was as wummy as it looked, and the party was a huge hit!