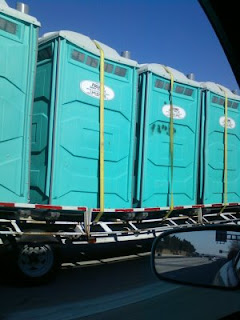 When I saw the first truck with them, I didn't think much of it. I passed the truck and when about my drive home, singing along to songs and trying to stay focused. Which was really hard because I was really hungry and very achy.... The second truck I passed and thought, "Huh! That's odd." And again, went about my business. As I appraoched trucks three and four, it dawned on me these must be the borrowed Porta Potties used for the Inauguration! I would have thought they would have been returned by now, but I guess not.

Wow! Marie, this is a great photo, you should send it in because they're historical Porta Potties and pretty! I like the color and the yellow securing them. This really is a great photo!

Thanks Gerri! They are historical Porta Potties! Can you believe I took this while driving? I'm still amazed at how well it turned out.