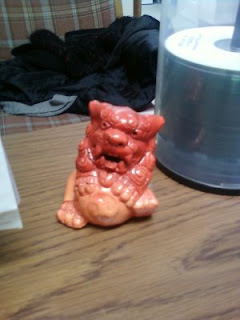 On my desk at work I have a pair of charming Fu Dogs. They are the only things I have decorating my office, mostly because I don't want to make it feel permanent. 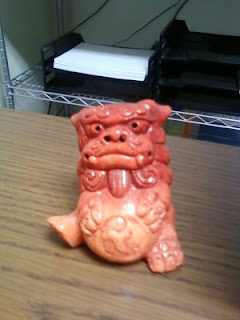 It is said that the Fu Dog was the guardian of Buddhist temples, thus warding away evil that would disturb the peace of the temple. Now why do I have Fu Dogs on my desk at work? Because they are charming and frankly I don't want anything to disturb the peace.

I found these resin Fu Dogs at Target, and they were marked down to $1 a piece at the end of summer. I was also able to buy two, sets of two, chopsticks sets for $1.50 a piece then as well. I have placed them in my box of kitchen items for when I get my own place again.

Mark called me today and he is now in Rio de Janeiro. I checked to see if he had posted any new pics, but he hasn't. I asked him if he was going to see, as I like to call it, the Giant Jesus, and he should be going to see that in the next couple days. The Giant Jesus is actually Christ the Redeemer, and is located on the Corcovado Mountain. What was cool is that he called me from Yahoo messenger from my cell phone. I hope he didn't have to pay anything for it. There was so much background noise though, it was hard to hear him. He said he would try to call me again tomorrow. He better call me tomorrow! Tomorrow is my birthday!!!

OK on tap for tomorrow is work during the day and then after work, dinner at PF Changs with Lucia, Cindy, and Janelle. Should be fun times, and yes there will be pics. Gosh... I carry my camera everywhere, and my cell phone has a camera too. So I have two cameras on me at all times. Obviously one is better than the other, but sometimes one is easier to get to. LOL

Oh wow! That's sooo sweet Mark called you, I saw that giant statue it's incredible, absolutely beautiful! I luv the Fu Dogs they're cute, I need a pair. Just think Marie, you'll be one marvelous year older, HAPPY BIRTHDAY !!!! Oh how is your rash, I hope it's better, mine is still here but considering my hands get wet a zillion times, it's taking longer to heal, oh well c'est la vie!!!

Thanks Gerri! I will fill you in on the rash later. But as of right now, it's still here.