OK, I have a pic to share of Mark's stop in Chile. I'm not afraid to say I got it off his facebook page. Ha ha. He is posting pics there as the days go by, and then I get to see them before he gets home.

I love this photo he posted. I love the sunflower, and statue of Mary in the background. 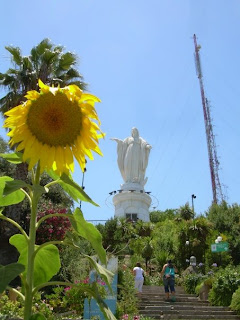 When I look at Mark's travel pics I almost feel like I am there with him, because I am seeing them as he posts them. I wish I knew where this was, but I know it was while he was in Chile. It looks as though it is some sort of garden or park.

So a week ago I noticed a funny patch of skin on my side. I thought I had maybe scratched myself or something and treated it with some neosporin. Well.... Saturday I was looking over my side because I was really itchy. Turns out now I have some sort of rash or skin irritation. I bought some Cortizone 10, and have been applying it a few times a day since Sunday. The itchy is less now, and some the redness is gone. But if I don't see an improvement by Thursday I will have to make a doc apt.

The thing is I have no idea what triggered this. I have sensitive skin, but I don't usually get rashes or anything. I have touched things and had my hands itch and swell, and I have also digested food which caused skin irritations. So we shall see what happens. Hopefully it's nothing too serious, if so I won't have $$ for Mark's birthday gift I'm planning on getting him. I'll be really bummed about that because the idea I have is really awesome.
Created by ~Marie~

Beautiful pic. I do hope your rash clears up. That can be frustrating, feeling itchy and not knowing where it's from.

Marie, I luv Sunflowers and this photo has brighten my mood. Guess what, I just applied Hydrocortizone 1% to my hands because they have a rash. Yesterday by accident while washing dishes I put on a pair of latex gloves not knowing they were and I am sooo allergic to latex, it's horrible! Sooo I know how you feel,get better real soon!

Live.Love.Eat- it is very frustrating... and I'm sure me checking my side every five minutes isn't helping either. Ha ha

Gerri- Wow, who knew we would be hydrocortizone twins?! I hope it clears up soon too. And I am so glad the sunflower brightened your mood. It is quite a lovely shot that Mark took.

The picture is beautiful; the two of you should be professional photographers and travel the world for us to see through your pictures. I sincerely hope the skin irritation has gotten better. Take care and keep us posted.

Hey CC. It is a beautiful picture. And thank you for the wonderful compliment. Trust me, if I could travel the world and just take pictures for a living, that would be awesome! Though I think I would miss radio just a little. And don't worry I will keep you posted on my skin irritation.