I wanted to post another pic for Christmas. It's our outside display. It not really grand, but quaint. Three deer and a tree, to be exact. Friday night Mark and I swung by this house that had it's lights timed to music, and you could hear the music IF you tuned your radio to a certain frequency. Pretty cool if I must say so. It must have taken a lot of work to make all those lights flash in time to the music!

Here is our front yard display! 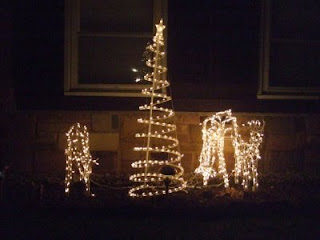 The good news is that I officially finished all Christmas shopping! Mark finally picked out his wallet he wanted, but he doesn't get it until Christmas.
Created by ~Marie~

Hi Marie,
I luv your decoration! I just put a swag on the door but it needs lights, it's rather boring but your decoration is festive!!!!
Lucky you, my Christmas shopping is very, very last minute. It's a mess!!!!

Hello I really like your blog, I would like a link exchange with you, I insert your blog to my favorite blogs ;)

the address of my blog is: http://marcocrupifoto.blogspot.com/