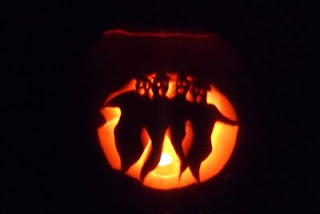 Well I carved my pumpkin last night... and here it is. I did pretty good I think.

After I was done carving I separated the seeds from the stringy mess they are attached to. Rinsed them and dried them. I then drizzled olive oil on them, salt and peppered them, added some garlic, and a touch of basil. I then baked the seeds for an hour at 250 degrees. The outcome is a taste treat that I think I will definitely be making again next year.
Today I also dropped 10 Halloween cards in the mail. I made them on Qoop out of a pic of Peanut in his skeleton costume. I sent them to some other schnauzer owners that I chit chat with via Peanut's myspace page. LOL ..silly I know, but believe it or not they send out cards and gifts as well. Sometimes Peanut gets more mail than anyone else in the house!
I've been contemplating getting a new cell phone. I have dropped mine tons of times and it looks relatively ok, but has some huge cracks in it. Sanyo does make a really durable phone, so I am impressed with it. But the cracks bother me... it's like it's one more tumble away from being destroyed, especially where the flip part is. I love the fact it's pink, color is now a key factor on when I purchase a new phone. I don't want black or silver... they are so plane Jane now. But I am torn between two very fancy phones on Sprint's website, both made by Samsung.
The Rant, with a slide out keyboard, or the Instinct, which is touch screen. Now I want an Ipod Touch, but would it be too "touchy" to have two products with touch screen capabilities? Quite possibly, the phrase less is more would absolutely fit here. I think it would be a bit excessive to have two touch screen products. I mean really, touch screen is cool, and pretty soon we will be living in a touch screen world, but for right now I feel two is too many. The Rant is cheaper than the Instinct, and it comes in red. It has all the same features as the Instinct, except the touch screen part, and there would be less screen for me to damage in a drop. I mean we all are clumsy at times... i.e. carrying cell phones, purses, a mug, shopping bags, and various other items all at once, we are bound to drop any to all of those items when our fingers can no longer carry the burden.
The Rant also has a very cool feature the Instinct does not... the ability to change your phone's favorites and other items from the web with Sprint One Click. I like that idea...
Alright enough of my ramblings for today....
The Rant 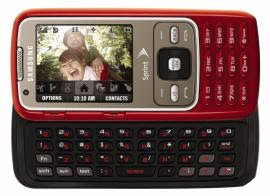 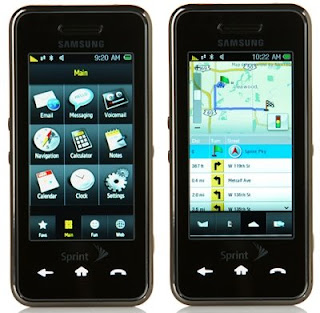 Wow. That pumpkin came out awesome. I have never attempted carving a pumpkin before. My chances of slicing off a finger are already up there being in the kitch all the time...........

The red one fits your personality, Marie. Do the red...and the pumpkin is OUTRAGEOUS!

You made me smile...mostly because you are right, the red would suite my personality!

I luv this pumpkin, Marie you are sooo amazing when it comes to sculpting a pumpkin! Absolutely worth being on a Halloween Martha Stewart Magazine cover !

Thanks Gerri! I don't know if I would be on Martha's cover...but some sort of home liiving mag would be fun! LOL