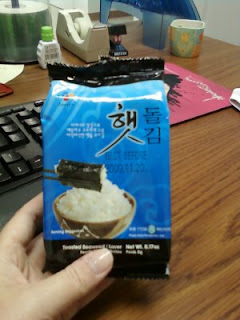 Mark recently shared one of his favorite snacks as a kid with me, Seaweed!

I've had it before with Sushi, and I even tried Seaweed Salad once. I like it, and from what I read about it.. it has some great health benefits!

Here is what I found at http://health.learninginfo.org/seaweed-benefits.htm

In the Chinese Book of Poetry, written almost 3000 years ago, there is a poem that describes a woman who cooks sea plants. Always considered a delicacy, Asians also offered sea plants during sacrifices to the ancestors.

Today, we know the plants as seaweed, which has many health benefits:

Seaweed has always been part of the staple diet of the Asians, who lived near the sea and depended upon it for sustenance. It may well be the “secret” for a long and healthy life for you.

Many health shops and oriental grocery houses sell seaweed in various forms. In dried form, it may be used as part of a raw vegetable salad or crumbled and sprinkled over a salad as a natural tangy seasoning. You may also use seaweed as a snack, together with a fresh, raw vegetable juice.

Seaweed seems like it would be salty but crunchy and delicious! I have to try some especially since it promotes healthy hair, mine is thinning because I dye it sooo much!
My sister says I'm going to end up like Jackie O. (Dead from Brain Cancer!) p.s. Thanks for sharing the seaweed !!!

It is kind of crunchy, and a has a little salt. Not a whole lot though.

I suggest using Redken Shampoos and Conditioners on your hair. It saved my locks when they got fried from dyeing them.