For some reason when it rains, it pours. Thursday night while trying to brush Peanut's unruley coat, I noticed on his neck, under his collar, a bit of matted fur. I unhooked his collar and proceeded to brush the area gently. He was not amused. When I take off his collar, he gets upset, like I'm stealing his identity or something. But then I was also brushing him... the fuzzy little guy hates brushes, he has chewed a few up in retaliation.

As I brushed the junk out of the mat, I noticed some of his fur coming out with it. After I was done brushing I noticed his skin was peeling as well, as if he had some sort of scratch or skin abrasion that had healed. I picked him up and carried him to the kitchen, put him in the sink and gave him a bath with the medicated shampoo I had left over from when he had a skin infection as a puppy. The vet said it was good to use this every once in a while to kill microbes that may cause any kind of skin irritation. 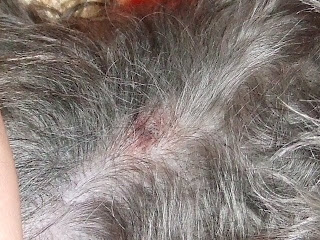 My resolve, I'm not jumping into going to the vet just yet. I'm going to watch the spot and see if it gets any better, or if it gets worse. I'm hoping for the better of the two.... I know he has a mole in the spot where the abrasion is, so maybe it was bothering him and he itched at it too much. I also decided to wait because I just made a $120 car repair and with now, I am feeling really stressed. I have other things to save for as well, and when things hit like this it really weighs on me.

I'm sure everything will be fine....

Here's a little photo I like to call "Where's Peanut?" 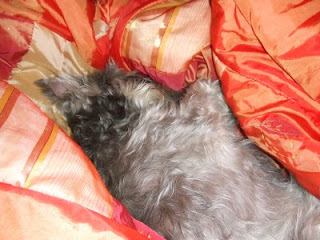 Oooh Marie, Poor Peanut! Maybe it's probably nothing serious. I know when it rains it pours. I am sooo tired of traveling and not being able to enjoy the trips and the killer is I'm not getting any perks, it's all business and no FUN!!!
p.s. Peanut looks really cute, but where's his head?

I'm sure it's nothing too, but I will still keep an eye on the area. It was looking better last I looked at it.

What's funny is I took this picture after he had been brushed and had a bath. He was pouting because I did that and he hates both getting brush and getting a bath. So why not mope by sticking your face in the covers and laying down. LOL He is too funny at times!