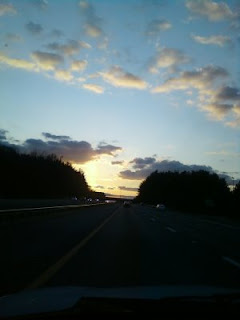 Just yesterday while watching some entertainment news, a report surfaced that a designer in Germany called Heidi Klum fat...... WHAT?! The Victoria's Secret Super Model/Mom of 3 is definitely not fat! There is not one fat cell on her finely tuned super model butt! If any little girl looks at her and believes that she is fat, we have a BIG problem.

Which brings me to a whole separate issue. Girls today have terrible self esteem. In fact I have moments where I have low self esteem, and I am 28. Growing up all I heard was, you are too skinny. Now I have grown into my skin, and I hear that I need to loose a few pounds. It's like I can't win. We live in a world where image is everything, and if you do not look like the model on a magazine cover then there is obviously something wrong. Flaws aren't embraced, they are despised.

Now then, we as Americans are an "I want it now" country. We love instant gratification, which makes fast food restaurants so popular. The reason our children are facing the health issues they are facing along with childhood obesity, is because we feed them fast food and plunk them down in front of the TV to overstimulate their brains so that later in life they are pretty much dependant on that to function. The average teenager spends more than 30 hours a week on a computer. That's a lot of time for a developing brain.

Frankly, pull your kids off the computers and couches, shove them outside and lock the door. OK, maybe don't lock the door, but at least make a rule that they cannot come in unless it's to use the bathroom. If they are bored with the outside, tell them to make up a game and run around crazy-like. If kids ran around outside playing games made up via the imagination rather than playing games on a computer/TV... there may be less cases of childhood obesity. Just saying!

OK... I forgot where I was going with all this, but Heidi Klum is not fat!

It makes me sooo mad because I know first hand what it's like to deal with anorexia, my sister suffered from it for years and it was devastating to not only her but our family. This idea that you have to be skin and bones is sick! Thank God that after years of counseling and programs my sister is now a normal weight no longer the 78 lbs at 5'6.
I agree with you about childhood obesity that's why cases of juvenile diabetes are going up! It's sad!!!

I'm glad your sister is better now. And this whole thing made me angry... Oi.