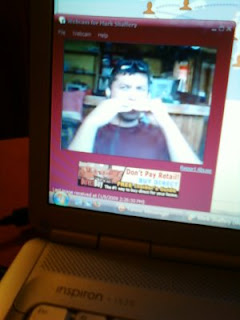 Above is a pic of Mark during our video chat. It was pretty cool. I liked it because even though he is in South America, it was like he was right there. Mind you I could not touch him, but I could see and hear him! He is doing great, and he is having a blast. While in Chile they have visited a winery, and he had 8 glasses of wine. Ha, that's a lot of wine for him. He's not much of a drinker, and according to him Asians don't process alcohol as quickly as other people. I'm not sure how right he is on that one, but that's still a lot of wine. He said he wrote down the name of the winery and that when he gets home, we will see if we can find the wine from there in our local wine store. Apparently they ship 80% of their wine to the US. Very cool. As soon as I see more pics of his trip, I will try and post them here, for you to see.

Today he is supposed to hopping a plane to Rio de Janeiro, and then he will email me again so that we can video chat again. 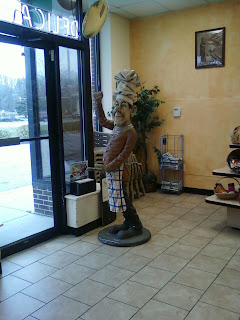 Saturday I was out and about all day. I woke up around 9-ish and went to work to finish up the Israeli radio program that runs on Sunday. The host didn't get me her music until 6 pm Thursday and I was not about to stay till 8 pm working on her show. So I opted to go in Sat morning. It was a good idea because then I was able to stop and get myself a bagel and cream cheese, and one for the Saturday guy. During the week I usually email the Saturday guy about the unusual happenings of my co-worker. The guy is more than a few sandwhiches short of a picnic. He is so paranoid and has a huge over compulsive disorder thing going on. I could devote a whole blog with pictures of his crazy signs, how he screwed the carpet to the floor, and many other things. Trust me, you would be wondering how the man still has a job. The funniest part about the whole thing is, even our clients come in saying how nuts the guy is.

After work, I called my older brother and we got lunch. On our way home, we stopped in an Italian Deli to grab a sandwhich for mom, and I took the pic above. The statue is so full of character!

After that my older brother and I went home, he then wanted to see a movie and we both wanted to see Bride Wars because we love Kate Hudson, and Anne Hathaway. The pic below is of a corner of the theater lobby. It was so unusually shaped, yet gave a great view of the parking lot. Ha ha. 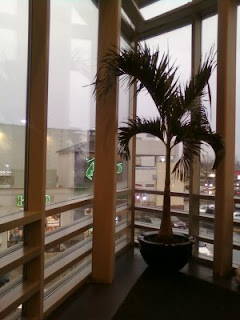 Bride Wars was really cute, and kind of funny. The premiss is that two best friends get engaged and they both want June Weddings at a certain location. In a weird twist of events, their weddings get booked on the same day, at the same time, at the same location, and neither one wants to move the date. They end up arguing and playing all kinds of cruel jokes on each other. Now I am not going to tell you how the movie ends, but I will tell you it was a great ending.

I am sooo happy you had your video chat with Mark, that must have been fun! What a cool statue too. I luv Kate Hudson sooo I can't wait to see Bride Wars, matter of fact I think I'll treat my sister to it next weekend before my Mom gets back from Florida!

You take such great pictures, you should look into a second career! So happy you got to talk to Mark in South America, our German adopted daughter has been down there since August.

Gerri- It was really fun to video chat with Mark, and I love Kate Hudson as well. You should totally treat your sister, because it is a fun movie.

CC- Thank you very much. I have often thought about taking up photography as a second career. We shall see what happens this year though, as I am determined to step forward in radio out of the small times and into the big leagues.