Today I want to take a moment to say, Peace out Hercules! My brother left his pigeon at our house and has no intention of ever picking him back up. Hercules is not well though, he seems to be suffering from seizures and doesn't come out of them until you start poking at him. It happens at least everyday. So when I took Peanut to the vet yesterday for his pink eye, I asked if they would be willing to euthanize a pigeon. After I explained the details of his health, they willing agreed, stating that it would be better for the pigeon to be euthanized rather than continuing to let him live and suffer from seizures. 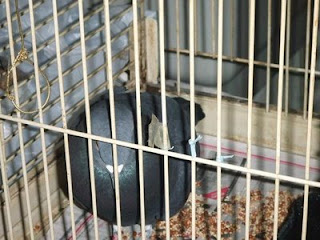 Hercules lived a good life. He was rescued off the streets when he was found with a broken wing, and taken in. Although I am not surprised my older brother wants nothing to do with his pigeon, I am a little angry that he didn't take the time himself to ask a veterinarian about euthanizing the bird a while back when the pigeon first started showing signs of a seizure problem. I mean, he pretty much left the pigeon in a filthy cage when he moved out of our house, with no food or water.

Now I don't want anyone thinking that we are euthanizing Hercules because we don't love him or animals for that matter, it's because he is really sick and his quality of life is not what it should be. It is better for him to be euthanized, rather than to live in pain and suffering.

Peace out Hercules! May your days in pet heaven be filled with endless bird seed, popcorn, and angels to poop on.
Created by ~Marie~

Oooh Marie, that's sad but now Hercules is at Peace, free of pain!
As I've said before you are a Blessing God sent from Heaven to all of the animals that roam this earth.
Hercules is looking down on you and smiling for giving him Peace!
How is Peanut feeling? I know it takes what like 48 hours for the antibiotics to work but at least we know he'll be feeling up to par soon!
Hey have a great trip!

Thanks Gerri, and yes Hercules is in a better place.

Peanut is doing well, he puts up a bit of a fight for the eye drops, but other than that he is ok. Occasionally if the light is bothering his eye he will stick his head under the blankets or pillows for some relief.

And as for the trip, I will have pics and a full report come Monday evening or Tuesday.