With only a couple days left of 2008 I wanted to do a brief year in review.

2008 started off with Mark heading to China, Thailand, and Australia for 3 weeks with his brother. It was the longest 3 weeks of my life. At the end of January, Mark and I attended the wedding of my friends Colin and Karen. It was the first of 3 weddings we attended this year. 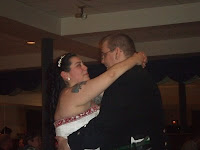 It was a lovely wedding.
Going into the spring it was pretty quiet. I was busy spending my tax return on my Peacock feather tattoo, and paying off my credit cards, only to use them again.
During the summer Mark and I went to Deep Creek, MD with some friends of his. During the weekend trip I thought I had a cold, but as the weekend went on I discovered it was actually Strep Throat. My older brother was already living with by this time with his cats, and I have reason to believe I got it from them.
As August approached, Mark and I attended another wedding. This one was for my friends Jessica and Tommy. Their wedding 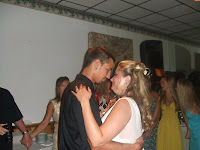 was actually just the reception, but was lovely regardless.

Let's not forget the baby shower I attended for my friend Gillian who had a bouncing baby boy in October!! It's safe to say that I was the one friend who did not buy baby clothes and bought baby blankets, bath toys, and a bottle brush. Frankly, kids grow fast and I wanted her to be able to actually use the items.
November came in the land of the weddings and Mark and I were once again in attendance of our friends Ashleigh and Leo's wedding. 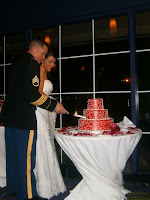 Talk about a lovely wedding! They spent thousands of dollars on this wedding which was solely a celebration of the two of them. Too bad it was held on a Sunday, or else Mark and i would have been there all night partying!
Then of course Mark and I took our Bahamian cruise, which was great.
This year was all about the weddings! I had little money problems, but my budget was pretty tight. I only had one real big car problem, and I'm thankful Peanut only had pink eye.
I'm looking forward to 2009.... and hopefully I can attain my goal of a new job. I applied at XM recently and today I called to see if I could pester someone into interviewing me... unfortunately they are on vacation until Jan 5th, 2009. Another part of 2009 I am looking forward to is my best friend's wedding. I know it will be a blast and I look forward to sharing everything with you through pictures and more as the 2009 year developes.
Created by ~Marie~

It sounds as if you had a very busy and exciting 2008, wishing you the best of everything for 2009!

Thank you CC, many wishes for a wonderful New Year to you as well.

Wow! I say Marie you had a very exciting year, one filled with weddings and you know what that means, hmmm, you're next!!!!
May the New Year "2009" bring you and your loved ones, friends and Peanut plenty of Blessings, Fun, Love and Good Health!!!!!!!!

Gerri- Thank you and many happy wishes to you and your family for a wonderful 2009.

Debra- Thank you and may you and your family have a wonderful 2009 as well.

Sounds like you had a wonderful year! Lots of weddings. Gosh, I haven't been to one in ages. Happy New Year my friend!!!