Yesterday we had snow flurries! By the time I grabbed my camera to video the first snow flurries of winter, it was too late! They had ended. I'm sure there will be more, the temp this AM as I rose out of bed, slipped on my slippers and took Peanut outside, was a chilly 20 degrees. I actually didn't feel much difference when I opened the door for the UPS guy just a few minutes ago. So when it's chilly, I grab my warmest shoes..... Sweater Boots... and all day long I have toasty toes. 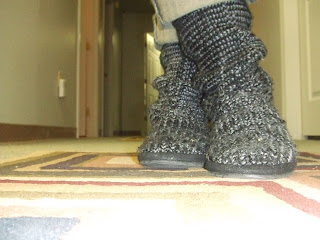 This week I embarked on the adventure of brushing Peanut's teeth. He has some mild tartar build up, and I bought a tooth brushing kit. The first day was kind of funny. I let him open the box of tooth goodies, which included a toothbrush, a finger brush, and doggy toothpaste. I let him sniff everything, and then I placed a small amount of toothpaste on my finger. I put out my finger to let him smell it and he ran to the other side of the room. Which I thought was hilarious. I picked him, and held my finger in front of his nose once more and he tried to wiggle his way out of my grasp. It wasn't until I stuck my finger with the toothpaste in his doggy mouth that he realized, "hey, this tastes good!" Tonight I will go through this all over again.

Speaking of Peanut, my fuzzy buddy received boxes in the mail occasionally and this time he got one from a schnauzer named Max. Max sent him some toys, some chewy things, and treats. And he sent him a lovely blue sweater for when it's cold. Mind you right now Peanut doesn't need the sweater too much because he is in desperate need of a haircut. You can't see his eyes, and all the fur around his ears makes them look tiny. I put the sweater on him a couple nights ago when we went for our nightly walk, and in protest he sat down every couple of feet. I'm trying to accustom him to wearing sweaters for winter, so it's an ongoing process. He fights me every year, but as it gets colder, he will eventually bring me his coat. Last night he wore the bomber jacket my older brother got him for Christmas last year. He still fought me, but at least there was no protesting while walking. 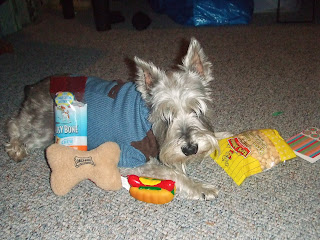 Marie,
I luv the sweater boots not only are they comfy and warm but they're stylish too! Speaking of stylish Peanuts needs to be featured in Doggie Vogue Magazine!

I always say he should be in magazines. If I could find a company to get him out there and booked for them here in Maryland, I would do it!