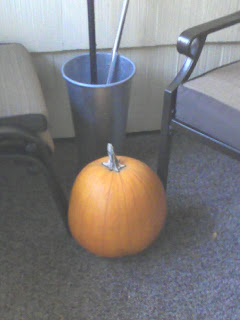 I got the pumpkin I am going to carve for Halloween this past weekend. Now I just have to figure out what to carve. I bought some new carving tools and got Peanut his costume. This year he is a skeleton! I was going to get him the hot dog costume, but they were sold out.

Mark and I attended a Halloween Party Saturday Night... it was ok. But I am really looking forward to my best friend's party this coming Saturday. I won't be able to stay long, but I will be there... 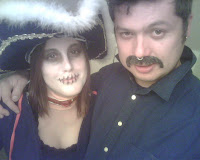 Love the lips! Absolutely stunning! I'm sorry to hear about the job, but I've got the feeling about you that your feet are going to land right where they are supposed to be. Hang in there!

Hi Marie,
Wow! You're make-up is sooo ghostly cool! That's okay about the job because the best is always saved for last,remember that. Hope you take a photo of Peanut in his costume, I know he'll be fashionably scary!

Thank you Gerri and The Writer! Even though I was bummed I didn't get the job, I know there is something else out there. All I have to do is find it... :-)

Oh I love dressing up....isn't it so fun to be someone or something else for a few hours.