Well, overall the vet visit was a good one. Peanut has a mild amount of tartar build up, but that can be remedied with a little bit of doggie dental care...i.e. the doggy tooth brush. Next time I am in Petco I will pick one up. That should be fun to attempt to do, LOL.... Peanut handled the visit well. What was funny was that while the tech was holding him during the shots, he started licking her repeatedly. She thought he was giver her kisses, I had to break it to her that he wanted her to let him go. Sometimes in the morning when he is done snuggling and wants to get up but I don't, I will put my arms around him. He will lick me until I let go... it's cute..

Peanut spent the rest of the day sleeping, and getting up to drink a lot of water (side effect from the shots) and going outside to potty. I was happy to know that there weren't any other effects, and before I left for th evening I instructed my parents to pick up his water dish at 8 pm, so that he doesn't have an accident because he drank too much water. They complained breifly that I was cruel by removing the water, but followed through.

Mark and I got to Buffalo Billiards before Cindy, which was no biggie. She was only a block away when I called her to see where she was. It was a pretty good time, the only damper was that the bar turned on the Presidential debate. It seemed the suck the life out of the room. While the debate is important, someone could have Tivo's or DVR'd it and watched later. I had a couple drinks, but didn't get terribly tipsy. Which is awesome, because I really didn't want to get drunk. 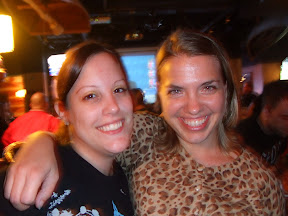 I'll be in bed soon, I have to wake up early for work on Sunday.... 430 am comes awful quickly!
Created by ~Marie~

Sounds like a good time! What is your job in that you have to get up at 4:30 am on a Sunday to do it?