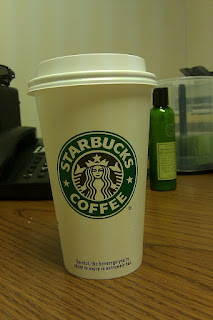 Why a pic of a Starbucks cup? Well, yesterday Starbucks had a free pastry day. I liked it, I got a free muffin with my Chai Tea that morning. I would like to commend Starbucks for this. When I saw the coupon on Facebook, they had me at FREE. I hope they do more of this, because I think it could be very good for business. But then again I don't see how Starbucks has trouble with business. Kudos to you, Starbucks. I thoroughly enjoyed my free muffin.

Also, I live fairly close to Washington D.C. Like, 30 minutes close. And I love all the museums, and what not, but tourists can be a little crazy. Especially since the Cherry Blossom Festival is about to start. So occasionally while driving I see huge motorcades transporting some political person somewhere (the State Capital, Annapolis, is where a lot of officials go for official business and where the Governor lives.). Imagine my surprise when I spotted Air Force One flying over Route 50. How do I know it was Air Force One? Well the huge American flag on the tail kind of gave it away, as well as "United States of America" on the side of the plane. I have no idea if the President of Vice President was on it. The President or VP will fly out of Andrews Air Force Base, which is also 30 minutes from where I live. 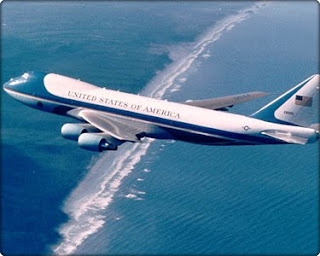 There is actually more that one Air Force One. Sometimes they use the other as a decoy so that the President can surprise people or be undercover if we aren't supposed to know where he is. I watched a thing about it on the History Channel once.