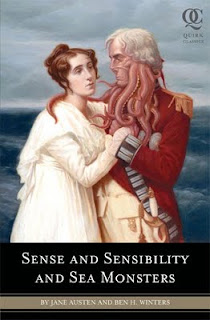 Someone else hopped the rewrite bandwagon for Jane Austin Novels, and now there is a charming book called Sense and Sensibility and Sea Monsters

. At first I found this book really hard to read, but I had a lot of crap going on (car issues, shingles in my ear, Lucia's wedding, and Bell's Palsy). As I got to about the midway point I couldn't put this book down. Sometimes I found I had to read over a sentence or two due to the fact that it is a Jane Austin novel, but I still really enjoyed reading it.

I'm really starting to find that book rewrites of classics are quite amusing and I want more. But I will say this, when my cousin suggested that I read Sense and Sensibility and Sea Monsters, I thought he was kidding. In fact I sent him a text message that said, "Holy crap! Sense and Sensibility and Sea Monsters is a real book. I thought you were kidding."
Created by ~Marie~

First "HOW ARE YOU FEELING?" MUCH BETTER I HOPE!
Secondly, I wish I could find the time to read but I'm up such a ****'s creek with bills and everything else it's really getting to me! This would make a great gift, paperback books are inexpensive sooo YOU just gave me an idea! THANKS Marie! I hope YOU have a GREAT weekend!:))
xoxo,
Gerri

Hey Gerri! I'm starting to feel normal again....I have a Bell's Palsy update I'm working on to post this weekend.

I'm so glad I gave you a good idea! I love it when I can help people.

You have a great weekend too!!