Tuesday was kind of fun. At 4 pm I usually have a live show in studio for their radio program, and the co-host of the show brought his dog, Pepper, with him. At the end of the show I thought it would be funny to get a picture of Pepper with head phones and and sitting at a Mic. I cropped out most of the original photo to make sure Pepper was pretty much the focus of the picture, then I had to photoshop out the hands of the co-host holding the headphones on the dog. I think I did a pretty good job. 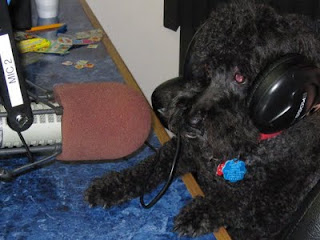 OMG! This is sooo funny! Leave it to you to come up with something sooo adorable and funny!!! P.S. His name Pepper fits him!!!

Pepper was so good and adorable. How could I not get a picture of this little guy at the Mic!