This past weekend at the beach was awesome.  We left Thursday night.  I should have known what the tone of the weekend would be after Cindy almost hit a cop standing in the road at night.  Ha ha, thankfully she saw him last minute as we all were screaming at her.  We got to Bethany Beach Delaware at about 1130, and drank until about 345 am. Then it was off to bed.  Once up Friday AM, Janelle, myself, Cindy, and Denise, all piled into Cindy’s car again to do some grocery shopping, and pick up Lucia’s ice cream cake.  By the time we got back it was about 3 pm, and then it was off to the beach. 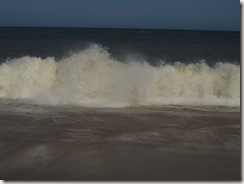 As we all set up our towels and what not, we rented an umbrella.  It was kind of windy, and all the waves out to see had white caps on them.  Hurricane Bill was off the coast somewhere, wreaking havoc.  The waves were big.  Some of the girls ventured into the water to swim.  I stood on the waters edge, with a few others, enjoy the splashing of waves.  We went back to our towels and that’s when the excitement started.

Melissa was smoking a cigarette, and a woman approached letting her know that it was not permitted on the beach, so Melissa put it out and we all went back to sunning and relaxing.  Next thing we knew our umbrella took flight and almost impaled someone on the beach. We got our umbrella back and repositioned it so that it wouldn’t take flight again. Next the beach patrol cop comes up and starts yelling at Melissa for smoking.  She explained to him she had not been smoking after she was told by the lady that it wasn’t permitted.  He then told her that someone had called him telling him she was smoking, and that if he was called again he would issue her a $500 dollar ticket.  After he walked away, we all glared at the woman who approached Melissa, while Melissa chose a few choice words to shout at her.  I mean really, she did put out the cig, and didn’t light up anymore after the lady said something.  So the phone call was really uncalled for.  Just as we were getting back settle, someone else’s umbrella took flight and hit Cindy in the face, Lucia in the head, and just barely missed impaling Melissa’s leg.  I had decided to dive down to the ground and only felt a light breeze as it sailed past me before barely missing Melissa.

After that craziness, we decided to go back down to the water. As I stood along the waters edge I noticed the waves seemed bigger.  Shortly after that a huge wave hit and the water came clear up to my knees, and then as the water rushed back out to sea, I lost my balance in the current.  I wasn’t really scared, I landed on my but.  As I sat laughing for a second, a second wave got me.  I shrugged it off again, not thinking much of it.  Right as I was standing up, a third wave knocked me over and dragged me in the sand.  As I stood up, I notice this time I did not come out unharmed.  My right knee had a huge scrape on it, and it started to bleed.  I rinse my leg with salt water, because salt water will disinfect the wound, and made my way back up the beach to my towel.  It was then I noticed my left leg had some scratches, as well as the top of my foot.  Ah well….I got a band aid for my right knee and then after a bit called it a day.  I wanted a shower more than anything. 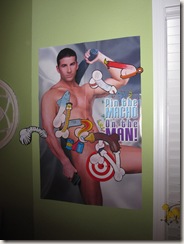 Later Friday after everyone came back and showered, and ate dinner, we started drinking again, and started playing games.  One was pin the macho on the man, which is kind of like Pin the tail on the donkey, but you are using different male genitals.  Pretty funny.  After that it was a game where one person had a plunger handle between their legs while blind folded, and one person has a toilet paper roll, and the person with the plunger had the find the hole of the toilet paper roll.  Which was hilarious!  After that we blind folded Lucia and took her to the garage.  There we had surprised her with a piñata, stuffed full of candy condoms, and confetti.  At some point Janelle decided she wanted to light fireworks off the balcony, and instead of flying like she said it was supposed to do, it fell.  Setting the bushes below on fire!  A few of us then turned into the “bucket brigade” and started hurling water on the bushes with pots and pans until the fire was out.  It was a fun night! 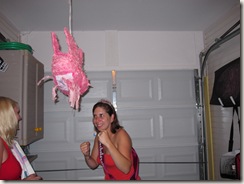 Saturday, we lounged all day.  Rain was falling off and on and it seemed pointless to go to the beach in the rain.  Some of the girls ventured down were back shortly after.  The beach was flooded for the most part, and no one was allowed in the water due to lightening.

Saturday night we all got ready to go out, and despite the rain and a bunch of cancellations by different cab companies, we made it out to Dewey Beach to the Rusty Rudder Bar, and had a great night dancing and drinking.  At the end of the night Janelle and I tried to get everyone into cabs, which proved to be a problem.  Lucia and Rachel had found two very hot marines and after we told them to get in the cab, they said they were fine and would call.  In which I told them to “get in the fucking cab” and then Lucia said, “Oh, I gotta go.”  Ha ha… during my wait as Janelle rounded up the remaining girls, I got a little person to give me a high five, which was awesome, and he and his friend stood with me while I waiting for my friends.  Shortly after they all showed up and we grabbed a cab home. 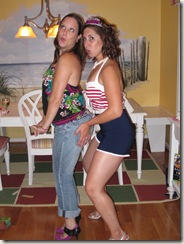 It was a really good weekend.  Lots of fun, and the bride was happy, which is what counts.

OMG! This was hilarious, you should enter this into a writing contest! I felt as if I were there too! I luv the plunger and toilet tissue game that's FUNNY! This entire POST made me LAUGH, what a GREAT way to end the EVENING!!! THANKS MARIE!
p.s. I luv that LAST PHOTO!!!!

Thanks Gerri. It was a really fun weekend with lots of fun moments. I'm surprised I remembered it all after 3 nights of moderate to heavy drinking.