Oi…. I have been pretty busy. My best friend put myself and her other best friend in charge of planning and hosting her wedding shower. She said she wanted a big shower with everyone, family and friends. Janelle and I totally agreed and since she is the bride, it’s pretty much whatever she wants. I mean she is getting married in two and a half months, now is not the time to be a jerk. Her family on the other hand sees that differently. As soon as Janelle and I got a date straightened out with Momma Dot, all hell broke loose. All of a sudden, her sisters gang up on Janelle and I with there own agenda of planning.

They claim there will be too many people there, and that we should just host a “friends only” party. Which is bull, because the only people who are invited are those who are attending the wedding. Which at most, if everyone made it, would be 50 people. The part that irritates me the most about this is that her family has not for one second taken into consideration what Lucia, the bride, wants. Not at all. They could care less what she wants, and what makes her happy. It also really makes me sad because I know it upsets Lucia that her family are acting like such huge jerks, and not listening to her about her wedding and wedding shower wants/details.

Now I have to be really, super composed and tell her mom, “fine we will have a separate party.” I would much prefer to tell her sisters and mom to stop being so damn selfish, and how rude they are being, but I won’t.

Janelle and I have to now figure out how to plan a bachelorette and wedding shower all in one. We have no idea what we are going to do……

Here is a picture I took of Mister Peanut today. I think I will try and submit it to a publication of some sort.. 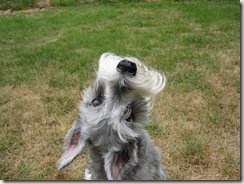 But that’s not the cool part. I discovered something really cool about my new camera. Depending on how you hold the camera while reviewing pictures, it rotates them automatically. Watch…

I know.. it's not the best clip, but you get the idea.
Created by ~Marie~

Weddings can bring out the best and the worst in family.

I LOVE the picture of Peanut...awesome shot!

Hey CC. That is very evident right now that wedding bring out the best and worst in family.

The picture of Peanut is really awesome. I took it right as he was looking up to see where I was while behind him.

Omg your dog is so cute!
And love the name peanut for him!
Beth xx

I saw alot of that bologna with the big weddings in NY. That's why I had just 16 people at mine on a beach in Key West. So simple without the bull or egos.

When my day comes, I want something simple just like that.

That is exactly what my husband and I did; a small chapel and a few family and friends. It was perfect.

See... sounds wonderful! In fact, I wouldn't mind eloping to Vegas because of craziness like this. Ha ha

It was PERFECT!Nothing crazy and no mean people and, well, you know, no bull*rap to deal with. It is supposed to be on of the happiest days of your life and all that stuff can really destroy the memories. Keep it simple, you will be happier and be able to keep a lot more money in the bank as well.