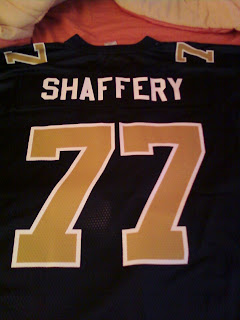 So last month (January) I ordered for Mark a replica New Orleans Saints Jersey with his last name and the year he was born. I have had his gift wrapped and ready to give to him since maybe mid-February, ha ha. But I was really good I did not cave early and give it to him.

So yesterday I gave him his gift and..... he really liked it! I was so nervous that he wasn't going to like it at all, and that totally wasn't the case.

But Marie, why the New Orleans Saints, don't you live in Maryland? Yes we both live in Maryland, but for no reason other than he just likes the Saints, is the reason they are Mark's favorite football team. It was funny, he tried to trick me by saying I spelled his last name wrong. And after he kept putting on the jersey and looking at it, like he was really impressed that I got him such a cool gift.

After Mark opened his gift we went to dinner and had some sushi. Sooo good. We have attempted to make sushi before, but for some reason it just tastes better when someone else makes it, and it's cheep to eat out with that rather than make it. Ha ha. It was really cool, and I am now kicking myself for not taking a picture of it, but the sushi chef (why does that not sound right) placed the sushi we ordered on a plate in the shape of a heart. It was so pretty looking, but I was starving and dove right in.

When we got home he then started showing off his Jersey to his roommate. It was really funny! For dessert I expected he would eat some of his ice cream I got him from Cold Stone, instead he dove into some goodies his step-mom made. He really doesn't like her, and I don't have time to get into the details as to why, but he only refers to her by her first name. And he says it with such force, like saying it gives him a bitter taste in his mouth. Anyway, she sent him some brownies and oatmeal raisin cookies for his birthday, and they were pretty good. So I did not get to put a candle in his ice cream and make him make a wish...Next time!

Great looking shirt and it sounds as if the Birthday was a smashing hit!

Marie what a clever gift ! You should think about starting your own personal shopping business because you find the greatest one of a kind gifts!!!
p.s. Glad Mark had a Great B-day!