Ah, Thanksgiving is over and now we partake in shopping for Christmas, or Hanukkah, or whatever holiday you celebrate. Before I get into what I did on black friday, let me tell you Thanksgiving was great. The food was delish, the family was happy, and I even caught my dad and boyfriend snoozing while watching football, at the same time. After dinner, after Peanut had already recieved two helpings of Turkey. One of which was given to him by my brothers, and they just stuck a big chunk in his bowl, they didn't break it up. I also gave him a helping, which was small in size, and broken up in his bowl. But those two helpings of Turkey didn't stop him from performing the great Turkey heist while I was clearing the table. LOL... you see my older brother left his chair out which was right next to the Turkey. It gave Peanut the perfect opportunity to jump up onto the chair and onto the table, and away with another huge helping of Turkey. It was quite funny, and I couldn't be too upset because it was a holiday and we had already given him Turkey.

Friday I avoided shopping malls, and made a trip to Lusby, MD. It was a long trip, an hour drive to be exact. And down a small private road was The Solomon's Island Winery. I had been looking for a bottle of my new favorite wine. Blueberry Pinot Nior. But the liquor and wine stores near me only carried a couple of their wines, and claimed they would have to "special order" the blueberry one. So I decided to go there and get it myself. Especially since I was buying a couple bottles as gifts. 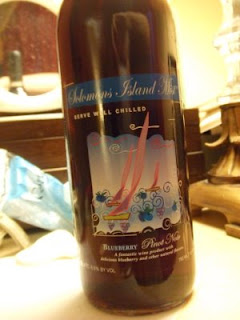 You wouldn't believe it, but this winery is operated out of someone's home! They had a driveway with extra spaces where you could park, and you followed a path around their swimming pool to get to the tasting room. In the back of the house there was a small patch of grape fines. I'm sure there were more somewhere else. The property used to grow tobacco, but as tobacco crops have become unpopular in Maryland, some locations are converting their tobacco farms into vineyards. I didn't know that until Friday, and there are about 5 vineyards in Maryland.

Solomon's Island Winery has a wide selection of wine, and I tried this Chocolate Wine....I wanna say sauce....it was so good and decadent. I may go back and get it another day, and use it with a dessert of some sort when I am feeling adventurous in a baking manor. Before we left between Mark and I, we had bought 6 bottles of various wines. And for purchasing as many as we did, we got this cute wine tote. 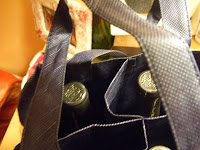 Lord knows if you are carry this thing, you mean to party! It has four compartments, and seems to be pretty strong. After the long trip I stayed home and lounged the rest of the day. I had to wake up pretty early for work this morning, so doing a lot was out of the question.

Well I have a pretty long week ahead of me. And then Friday through Monday I will be away on a short vacation in the Bahamas. It will be nice to get away for a weekend.
Created by ~Marie~

Hi Marie,
I am sooo glad you had a fun Thanksgiving! Lucky you, you went to a winery that sounds like sooo much fun. I luv your wine tote it's very chic. Peanuts is funny, that kinda reminds me of Christmas Vacation with Chevy Chase when everyone was having dinner and the dog and cat were into things. I envy your Bahamas vacation especially now since it's getting freezing cold, I know you'll have a blast of fun!